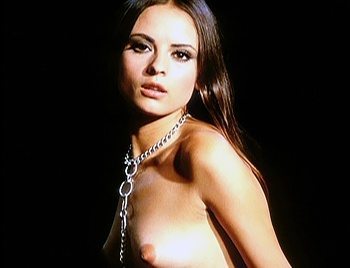 …And then there are the tragic ones, those that left us too soon with the promise of many great things to come. Such was the case with Claudia Jennings, such is the case with Soledad Miranda, a great and talented beauty on her way to become an exceptional figure in the realm of fantasy cinema. At least, more than 35 years after her disappearance, she’s still not forgotten, as her work in Jesus Franco’s cult movies of the late ’60s/early ’70s continues to grow in popularity. If only one person embodies the spirit of this web site, it is she.

Soledad Redon Bueno was born on July 9, 1943, in Seville, Spain, by Portuguese parents. An early starter, she was only eight years old when she entered a talent competition of flamenco dancing. She would eventually befriend singer and dancer Mikaele Wood, with which she would live with in her early teens. Logically, Soledad made her film debut as a dancer in La bella Mimi, at the age of 16. She made a tiny appearance alongside star Wood in La reina del Tabarin, directed by a young Jesus Franco.

Soledad next worked on many small Spanish films. Her beauty came to the attention of American film producer Sidney Pink, who gave her a role in a locally filmed production, The Castilian, starring Cesar Romero. Again hired by Pink, Soledad made her horror film debut in Pyro, playing an innocent girl, a role that got her praises in the press. Another fright flick followed, Sound of Horror, with another up-and-coming Siren, Ingrid Pitt, herself making her own entry into horror movies.

After a couple of more local projects, Soledad settled down with her male co-star for these films, race-car driver José Manuel Simoes. They married around 1967 and had a son. Jesus Franco coaxed her in making a comeback a couple of years later when he was casting for his production of Count Dracula. In accepting to return before the camera, Soledad would be responsible for one of Franco’s best pictures. Even Christopher Lee, reprising the immortal role of Dracula in a different setting than his Hammer movies, admitted that Soledad possessed an unique quality. A documentary exists about the troubled shooting of Count Dracula, entitled Vampir, containing the only footage of Soledad as herself. The fresh-faced young ingenue had become an haunted-looking, enigmatic presence, with an aura that would characterize her work to come. Soledad took the time to make a (topless!) cameo for the western 100 Riffles, co-starring Burt Reynolds and Raquel Welch. 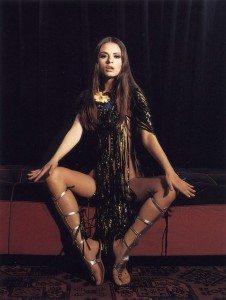 Next, Franco found financing in Germany for another memorable trio of scripts, these ones cementing Soledad Miranda’s legend for eternity. First came her most widely-known role, for Vampyros Lesbos, a title that left nothing to the imagination. In this truly unique vision of vampire folklore, Soledad plays Countess Nadia, on the prowl for young women to seduce and bring back to her sunny island. Stills from this movie with a frequently disrobed Soledad are still classics of the horror genre.

She Killed in Ecstasy (known under many other titles worldwide) remains for me her ultimate role, and one of the best female performance in the whole horror genre. As the perfect Angel of Death, she takes vengeance on people who ruined her husband and made him commit suicide. There is no words to describe Soledad’s presence in this production: we can witness her character slowly losing her grip on sanity, being kept alive by a desperate sense of revenge. Movies like this don’t get made anymore…

The Devil Came from Akasava completed the trio, being a spy movie based on a Bryan Edgar Wallace novel. Soledad played an undercover British Secret Service agent posing as an exotic dancer. Soon after, German producer Arthur Brauner offered Soledad a three-year contract to star in two big-budgeted film per year. International stardom was just an heartbeat away…

The very next day, August 18, 1970, Soledad and her husband were involved in a car crash on a Lisbon highway, as they were on their way to read and approve the Brauner contract. To this day, it’s still not clear if Soledad died instantly or days later in the hospital. Her death was announced months later, as her last films got released. She had already filmed half of Franco’s Juliette and this footage was probably destroyed. Her husband and son are still living, in complete anonymity.

Franco’s life and work was forever changed: his next lead actresses were directly influenced by Soledad Miranda. Her secret and tragic life touched anyone who had the opportunity to see one of her latter pictures. She truly remains a giant among female horror film performers.

Thanks to Amy Brown for direct (and indirect!) inspiration…

Check out these other Siren profiles: