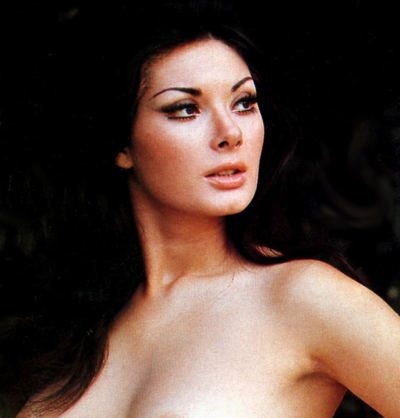 To talk about Edwige Fenech to fans of seventies European exploitation movies is to talk about Mecca to a Muslim. Needless to say, in swimming amongst potential Cult Sirens, we can find some that are less known than others. One of them is Edwige Fenech, a curious name than means nothing to common mortals. The works of this delicious damsel is not very well-known in North America (a bit more so in Quebec, lucky devils that we are). Many of her sex comedies used to play in Montreal theaters; some were part of late night movie packages on local TV stations.

Ah, to remember this glorious era when girls sported beehive hairdos and strategic eye-liner… The joy with Edwige is that she got naked in seconds, displaying no worries in the world. More so, in the many hammy comedies that she starred in, we could detect a real spark of intelligence, a knack for sincere humor. I personally didn’t object to any nude scene because, in all honesty, why can’t we mix some spark into tedious scripts? The handful of photographs here are just the tip of the iceberg, if I can express myself clearly. In other words, I could have created a more “For Adults Only” page.

What do we know about Edwige Fenech? Nothing much beyond the same and usual boring statistics. She was born on December 24, 1948, of French (daddy) and Tunisian (mom) origins. She begins her career very young in a comedy (one of numerous European co-productions that would populate her future): Toutes folles de lui, telling the story of a guy who inherits his father-in-law’s bordello and becomes a super-stud after swallowing some special vitamins. Another co-star was the amazing Serge Gainsbourg (the inspiration for the main character?). 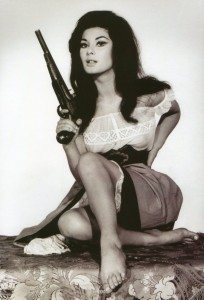 Edwige’s sensual beauty couldn’t be forgotten and she soon found herself a major player in an unending list of European films, principally from Italy, France, Spain and West Germany. Generally, these were light comedies (with some primitive humor) and a couple of thrillers, as well. It’s no exaggeration to note that between 1968 and 1982, she was one of the world’s busiest actress, extremely popular everywhere in Europe. So why not take a look back at some worthy title from her rich filmography:

Samoa, Queen of the Jungle (1968) Edwige in the title role; key film for her popularity with photographers…

Seducers (1968) Hey, kids! This is another title in a long line of films where Edwige plays a good-natured prostitute! With Rosalba Neri and Ewa Aulin, gargl! This is the story of a whore hired to take care of a young virgin guy on a cruise ship. Tons of sexual shenanigans aboard that boat.

Next! (1970) A Sergio Martino thriller with a couple struggling against the missus’ ex-husband. Female bodies are piling up: who’s really responsible and why? A must-see for any Fenech fan, this picture is typical for its era, with ingenious doses of violence, great players and excellent soundtrack. See it in widescreen, please.

5 Dolls for an August Moon (1970) An important film for Edwige, directed by Mario Bava. A sometimes confusing plot, but worth a look with its touches of black humor and Edwige at her loveliest… gaaahhh!

Demons of the Dead (1972) Edwige reunites with Martino for this film with many titles, telling the story of a young woman having nightmares about her mother’s murder. Someone takes her to a satanic ritual, in the hope of curing her (!). She becomes a tool at the hands of this cult, who order her to kill for them. Soon, a mysterious stranger follows her… Another must for her fans (and those who wishes to be). 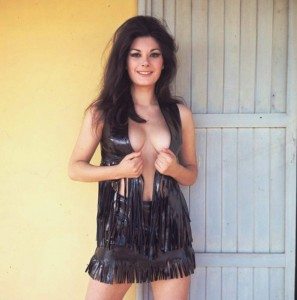 Your Vice Is a Closed Room and Only I Have the Key (1972) One of my all-time favorite title for this other Sergio Martino thriller.

The Case of the Bloody Iris (1972) Another giallo, yeah!… and maybe my favorite Edwige movie! There’s a lot of murders at a modern building. The usual suspects are lining up: a mother and a disturbed son, a daring lesbian, our main heroine’s new boyfriend… an excellent thriller! WHAT ARE YOU WAITING FOR??? And Edwige wears a tie!

Mean Frank & Crazy Tony (1973) A spaghetti-western with Lee Van Cleef, Tony LoBianco and Jean Rochefort (!). Tells the story of two guys wanting to escape from jail, one a minor thief, the other a respected and feared criminal.

Strip Nude for Your Killer (1975) Another fascinating film title.

Sexy Schoolteacher (1975) This is the beginning of an Italian series where a female schoolteacher turns her male pupils crazy with her beauty and short skirts… Who else but Edwige could play such a role? 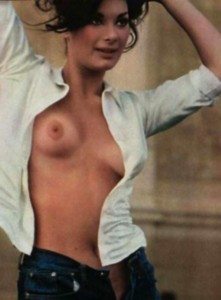 The Great Battle (1977) A big international production for Edwige, rubbing shoulders with Henry Fonda, John Huston, Orson Welles (narrating), Helmut Berger, Stacy Keach, Giuliano Gemma and Venantino Venantini, directed by Umberto Lenzi. This is a WW2 movie of which I never read a good review. It’s a shame that it did not become popular for Edwige to expand her international career.

Dr. Jekyll Likes Them Hot (1979) A comedy by Steno with Paolo Villaggio and Gordon Mitchell.

Catherine and I (1981) An Italian wine merchant on a trip to the U.S. becomes enchanted by the prowess of a female robot, supposedly the ideal companion. He brings her back to the country, where he finds that she hides human emotions.

Tais-toi quand tu parles (1981) A Philippe Clair movie, king of men, just before he worked with Jerry Lewis! This production got great publicity in Quebec, considering star Aldo Maccione’ sudden popularity. A James Bond fan is mistaken for a real spy (who’s really gay) and finds himself on a complex mission in Tunisia. Ah, Edwige coming out of the sea in magnificent swimwear…

Ace (1981) On the eve of his wedding night, some guy wins big money. He is then killed. Soon his ex-future wife is the only one that can see his ghost, who tries to do right by her in choosing another interested party to wed. With Sylva Koscina.

Phantom of Death (1987) Directed by Ruggero Deodato, with Michael York and Donald Pleasance. A pianist suffers from some rare disease that ages him prematurely. So he decides to kill all his former girlfriends. Witnesses can not give accurate descriptions, as his physical deterioration runs wild.

Recently, Edwige became a television producer in Italy, now appearing sporadically in TV movies. To anyone’s delight, she will be present in Eli Roth’s Hostel: Part II! To my own amazement, one of the most beautiful actress of all time, is still not an household name… and will probably never be. She remains the ultimate fiancee of Euro-erotica fans. So, if you didn’t knew her before reading these lines, WHAT DO YOU THINK NOW???

Check out these other Siren profiles: